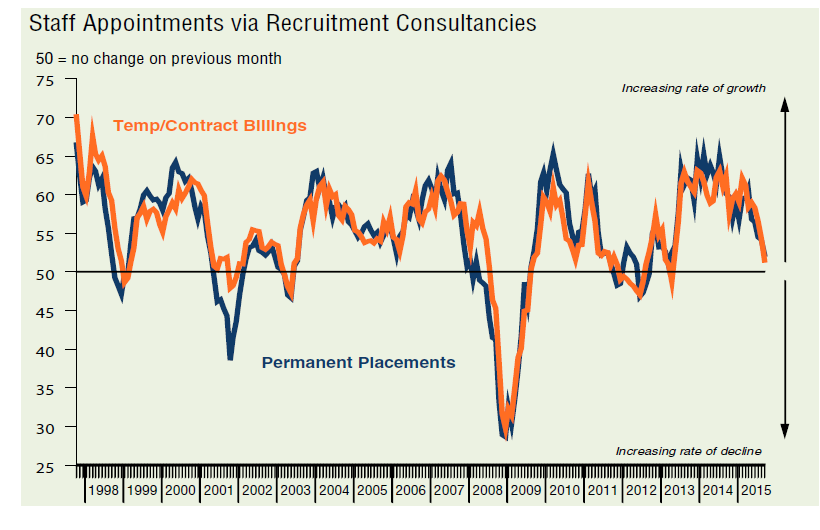 Permanent placements continued to rise in September. However, the rate of expansion eased to a two-and-a-half year low (since March 2013). Panellists again reported that a lack of suitable candidates had restricted placements during the latest survey period.

The strongest rise in permanent placements was recorded by Midlands-based consultancies, while the only decline was signalled by those based in London.

Average starting salaries for people placed in permanent jobs increased further in September. The rate of growth eased to a 20-month low, although remained strong overall. Where a rise in salaries was recorded (at around 26% of panellists), this was frequently attributed to shortages of suitable candidates.

The sharpest increase in salaries was recorded in the Midlands, while the slowest growth was signalled by London-based consultancies.

…amid slower drop in candidate availability

The availability of staff to fill permanent job roles fell further in September. The rate of decline eased to the slowest in three months, but remained marked overall. Around 39% of panellists reported lower permanent staff availability, compared with 12% that signalled an improvement.

All four English regions registered lower permanent staff availability, with the sharpest reduction signalled in the Midlands and the slowest decline indicated in London.

Latest official data from the Office for National Statistics (ONS) signalled that vacancies rose 8.5% on an annual basis in the three months to August. That was the slowest growth in two-and-a-half years.

Meanwhile, internet-based recruitment spending was up 5.9% on a year-on-year basis in the first quarter of 2015. This was up from 4.4% in the final quarter of 2014.

The long-awaited upturn in pay, which has been the missing element of the UK’s economic recovery, looks to be finally upon us, reviving the prospect of a Bank of England rate hike by the end of the year. Excluding bonuses, UK pay in the three months to July rose 2.9% on a year ago, according to data from the Office for National Statistics. That was the steepest rise since February 2009. Pay including bonuses also rose by 2.9%.

Strip out the austerity-hit public sector and private sector pay rose at an annual rate of 3.4% (both including and excluding bonuses) in the three months to July. This is a rate of increase that would normally worry policymakers into a pre-emptive hike in interest rates to avoid upward wage pressures feeding through to higher inflation.

Looking at July alone, the news on pay is even firmer, with regular pay up 3.2% on a year ago, the largest rise since November 2008, fuelled by a 3.7% surge in private sector pay. Pay growth is accelerating across the board, increasing in manufacturing, construction, retail, financial services and the broader services economy.