The Impact of Brexit on the Financial Sector

The industry is crucial to Britain’s economy, accounting for 12% of Britain’s economic output and paying more tax than any other industry. Roughly one-third of the transactions within this sector involve clients in the EU.

There is a division among the population as to the impact Brexit will have on the industry. Politicians and economists warn that London may lose its renowned position as a financial centre. Conversely, those who voted leave support their decision, arguing that Britain will benefit through becoming more self-sufficient.

The exact impact of Brexit cannot be predicted. However, below are some indicators to show that leaving the EU will encourage a slowdown in the economy but no drastic decline.

Highly-respected estate agents record that commercial property prices in London have dropped more since the Brexit vote than during the global financial crisis of 2009.

In terms of figures, the price renting of real estate has dropped by about 5% since last year. However, leasing activity in this area was 17% higher than the long term average in the first three-quarters of 2017.

Apart from a few exceptions, in general fewer people are using the tubes. The number of people using Bank and Monument stations is facing its first fall since 2009. A spokesman for Transport for London denies that the closure of some escalators at Bank station in response to the expansion was a significant cause of this change.

Although the number of people who using Canary Wharf station has continued to rise, the pace has slackened.

Currently there appears to be no impact from Brexit of premises applying or renewing their licences to sell alcohol. In fact, the first eight months of 2017 showed these figures to be at a record high.

However, London’s night life no longer focuses on finance workers but attracts a diverse array of individuals. These findings may not be entirely pertinent for this study.

This airport is selected especially by executives for flights to European cities and beyond. Statistics suggest that the number of such people using this airport faces its slowest increase in five years.

In terms of figures, the increase in passengers in the first six months of 2017 was only 0.9% compared to the average annual increase of 10% in the previous four years.

The number of available jobs in London’s Financial Services has fallen the most in the five years.

It is estimated that around 10,000 finance jobs will be transferred out of Britain and placed overseas in the near future if Britain is denied access to Europe’s single market. The first type of jobs to be transferred may be at the lower end of firms, meaning that in the short term London may still cling onto its status as a financial centre. 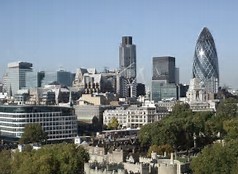