Commentary “Its great news that employers are continuing to hire. However, that growth is slowing down and one of the reasons is that we simply do not have enough people for all the roles that are out there at the moment. And the number of vacancies is still getting higher. For jobseekers this is good news as employers are willing to pay higher starting wages to attract the right candidates.

EU workers are leaving because of the uncertainties they are facing right now so the situation may well get worse and employers will face even more staff shortages.”

A strong underlying demand for permanent workers has created the continued growth in recruitment. However, shortage of suitable candidates and concerns over
the UK economic outlook has been detrimental to the overall pace of expansion.

This trend occurred throughout all of England; however permanent job vacancies in the South of England continued to increase at a faster rate than the national average.

Increased Demand in Workers Juxtaposed with Declined Availability of Workers…

Since October 2016 to October 2017 there has been an increased demand in workers across all sectors, in particular:

The problem is compounded by the lack of availability of workers throughout the UK. The sharpest drop in permanent candidate availability continued to be seen in the South of England. 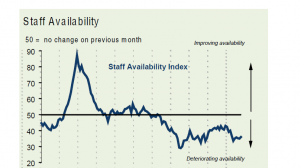 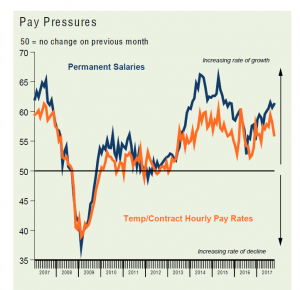 Average weekly earnings have continued to increase but at a slower pace than living costs. Higher fuel and food costs have been key culprits in the inflation. Combined with the concerns that real pay will continue to decline, there will be further pressure exerted on household budgets and spending.