So what are the advantages and disadvantages of being a part of Europe? Would Britain be better off staying inside the club or going it alone? 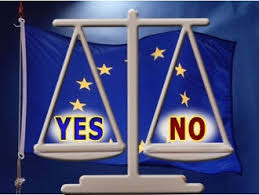 Trade: One of the biggest advantages of the EU is free trade between member nations, making it easier and cheaper for British companies to export their goods to Europe. Some business leaders think the boost to income outweighs the billions of pounds in membership fees Britain would save if it left the EU. The UK also risks losing some of its negotiation power internationally by leaving the trading bloc, but it would be free to establish trade agreements with non-EU countries.

Investment: The general view is that inward investment could slow in the lead up to the vote due to the uncertainty of the outcome and its consequences, following the precedent set ahead of the Scottish independence referendum in 2014. Longer term, there are diverging views: pro-Europeans reckon the UK’s status as one of the world’s biggest financial centres will come under threat if it is no longer seen as a gateway to the EU for the likes of US banks, while Brexit campaigners argue London’s unique appeal will not be diminished.

Jobs: Free movement of people across the EU opens up job opportunities for UK workers willing to travel and makes it relatively easy for UK companies to employ workers from other EU countries. UKIP says this prevents the UK “managing its own borders”. But, writing for the LSE, Professor Adrian Favell says limiting this freedom would deter the “brightest and the best” of the continent from coming to Britain, create complex new immigration controls and reduce the pool of candidates employers can choose from.

Regulations: Eurosceptics argue that the vast majority of small and medium sized firms do not trade with the EU but are restricted by a huge regulatory burden imposed from abroad. However, others warn that millions of jobs could be lost if global manufacturers, such as car makers, move to lower-cost EU countries, while British farmers would lose billions in EU subsidies.

What does British business say?

Most business leaders are thought to be strongly in favour of staying in the EU, but all the early running has been made by a business-focused anti-EU group, Business for Britain.

What about the rest of the business community?

As a whole, entrepreneurs and business owners in Britain broadly remain in favour of remaining a member – and their enthusiasm may be growing. According to the Financial Times a survey of 3,800 businesses last year found 63 per cent believe that leaving the EU would have a negative impact for Britain, a rise of 4 percentage points since the end of 2014. The sentiment seems to be reciprocated: of 2,600 senior executives in 36 countries across Europe in February, nearly two-thirds of those in the eurozone said a British exit from the EU would have a negative impact on the European economy.