Key Points from the November Survey:

The growth in permanent placements has reached a three-month high across the UK. The rise has been attributed to an increased demand for staff and company expansion plans.

The number of permanent placements in the South, conversely, is increasing at a slower rate.

Staff vacancies have continued to rise sharply. The rate of growth since October, however, has slackened slightly.

Across all sectors, the number of permanent staff vacancies has increased. In descending order, the sectors with the greatest number are:

Across the UK the availability of candidates to fill permanent roles has continued to decline. The South has recorded the steepest decline in permanent labour supply. The key permanents staff skills reported to be in short supply include:

The average starting salaries for permanents jobs has continued to increase, resulting in a growth which has lasted for just over five-and-a-half years. The increase is salary has been attributed to low candidate availability combined with a strong demand for staff. The quickest rate of inflation has been recorded in the North.

The unemployment rate and claimant count for the UK remains historically low.

The unemployment rate stands at the lowest level it has been since 1975. It is virtually identical for both men and women.

In October, approximately 806,000 people claimed out-of-work benefits. Although a rise by around 24,000 people compared to last year, the claimant count has remained close to its lowest level recorded in the early 1970s. 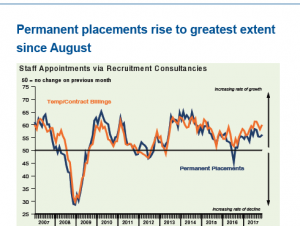